Hyper-realistic simulations with the maximum level of immersion using VR with a full-body tracking suit and tactile feedback system​. Surgical training and simulation VR platform integrates a software and hardware complex which is used in carrying out collaborative operations and tool skills training with the help of VR-technologies. 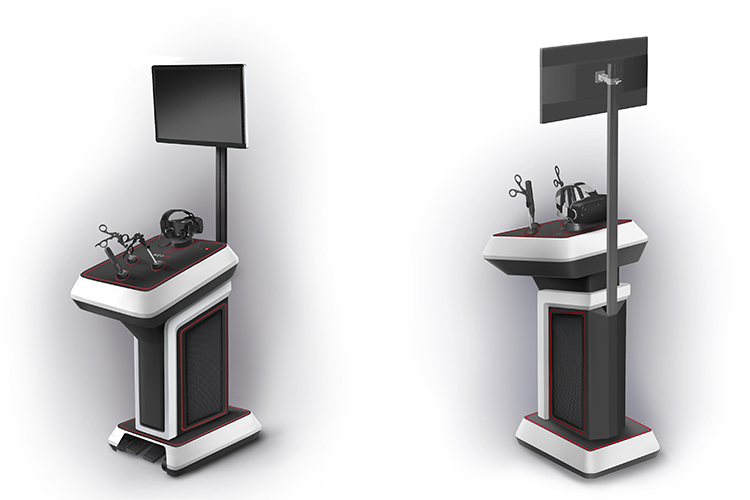 The latest research numbers indicate that around 30 percent of surgical graduates are unable to operate independently. Furthermore, with the aging population, the global market is expected to have a shortage of surgeons within the next few decades. This leaves medicine with a challenging skills gap.

Understanding this complex context, a medical innovation company tasked EnCata with providing a training and simulation platform for assisting healthcare professionals to bridge the surgical training gap with the help of augmented and virtual reality technologies.

The major challenges the EnCata design and engineering team faced while working on the project were:

Innovation in healthcare has been relatively slow compared to other industries such as software and electronics. There’s no lack of investment in healthcare innovation, but rather a lack of successful penetration given the barriers to entry due to the complexity of the market, which involves the need for FDA approval, the risk of costly failed innovations, and working with insurers.

The consumer cost of medical and hospital services has increased by over 200% during the past two decades as the cost of delivering those services has increased. This highlights the need for more disruptive innovation in order to make healthcare more affordable to the public.
If hospitals do not innovate and adopt the latest technologies to become more efficient and effective in their treatments, they may not be able to address the rising costs for patients.

Nowadays, there are critical issues in the way surgeons are trained, both in residency and beyond. Most medical students are trained for surgery using a variety of ‘theoretical’ and ‘practical’ learning tools. Theoretical tools include textbooks, manuals, guides, and videos, while practical training includes procedures on cadavers or on real patients with a senior surgeon present. However, the future of training combines both.

Surgery is a stress not only on the patient’s body but also is a daily mental burden on the surgeon. We have developed an advanced simulator for the most modern methods of surgery based on virtual reality technology that gives the most realistic simulation of actual surgery. Trained specialists can be inserted into any type of laparoscopic surgery, and the device’s special feature is the possibility of special training for future neurosurgeons.

To interact with the virtual world, the patented comprehensive technology of full immersion in virtual reality MedVR Atlas is used. It implements a system for determining the position in space of a person and parts of his or her body. Thanks to this process, the learner interacts with the virtual world in a natural way without controllers. The MedVR Atlas technology allows for any interaction with a virtual patient.

The major challenge we addressed in the development process is the correct layout of the dissector where fixing and strain elements won't wreck the handle of the enlarged unit as the dissector in a real surgery is a thin shaft with a handle. As an elliptical, the dissector handle is a complex mechanism that consists of hanger elements, weighted engines, sensors, cables. The next obstacle was providing collaborative work of 3 mechanisms (two enlarged units and laparoscopy) in limited table space and their close position one another. Finally, we needed to find engines and engineer a gearing for hanged nods. Their effort should conform to the real force on the handle of surgery laparoscopy with limits in weight and dimensions.

When the Client could not give precise technical data and we had to take into account non-formal User requirements, we developed the idea to produce a simple template for digitizing these indicators. We developed the prototype of the enlarged unit with a direct current engine connected. We interviewed the surgeons who shared with us their feelings about using the prototype. This way, the EnCata team got strain and technical characteristics for engineering.

The developed hardware includes dissectors and endoscopes which are connected to sensors and drivers for feedback. Also, it has VR glasses which allow simulating the work of surgery with the help of software.

Following below are some specifications of the technology.

The physical design is centered around the high-quality VR simulation of a physician's working environment. The simulation is created using an in-house technological complex for creating full immersion.

The development process can be highly divided into five stages.

The first stage was the development of the industrial design of a software and hardware complex for simulating surgery.

The second stage - the development of the solo knot of the enlarged unit. The knot of the dissector is a part of a virtual laparoscopy simulator. It accepts student’s actions for data transfer and provides feedback. At the same time, it reprograms the work of the enlarged unit during real surgery. The knot is close to structure and acceptance, it has the same functionality and it transfers all necessary efforts and feelings to the student's hands.

The third stage - the development of a mathematical model for calculating the three-dimensional coordinates of the position of a virtual tool which is based on four angle coordinates. The virtual tool was placed in these coordinates in the original software: scissors, clamp, needle, and others for the enlarged unit knots and a camera for the endoscope knot. Pinpointing the location of two tools is necessary for the further development of software.

The fourth stage - in-house manufacturing of the dissector’s knot prototype. After the prototype was ready, we launched the testing to check out the software. As a result of testing, additional algorithms of data processing were included in the software. The improvement list of the enlarged unit was offered for the next stage of development.

The fourth stage - in-house manufacturing of the dissector’s knot prototype. After the prototype was ready, we launched the testing to check out the software. As a result of testing, additional algorithms of data processing were included in the software. The improvement list of the enlarged unit was offered for the next stage of development.

The fifth stage - modification in models and layout solutions for the next production of the table with two dissectors and laparoscopy (TRL 5-6). The proposed variant simulated the accurate position of the enlarged units and tactile feedback during work (it  results in minimal parasitic load):

- modified kinematics scheme which is different from the one proposed by the Contractor allowed the significant reduction of the parasitic load on the dissector.

- the transfer of the cutting motion load from the enlarged body to the handle allowed to reduce the enlarged mass.

Those changes helped to increase angles in which the proximity of the two dissectors does not interfere with their work with each other. 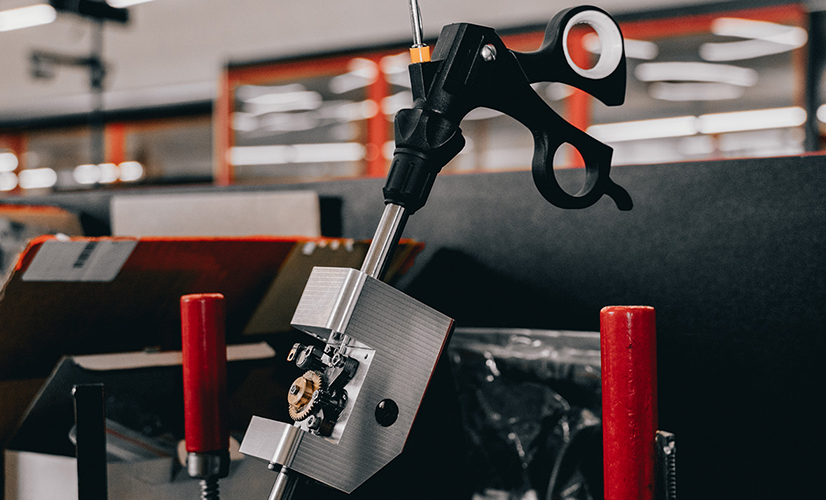 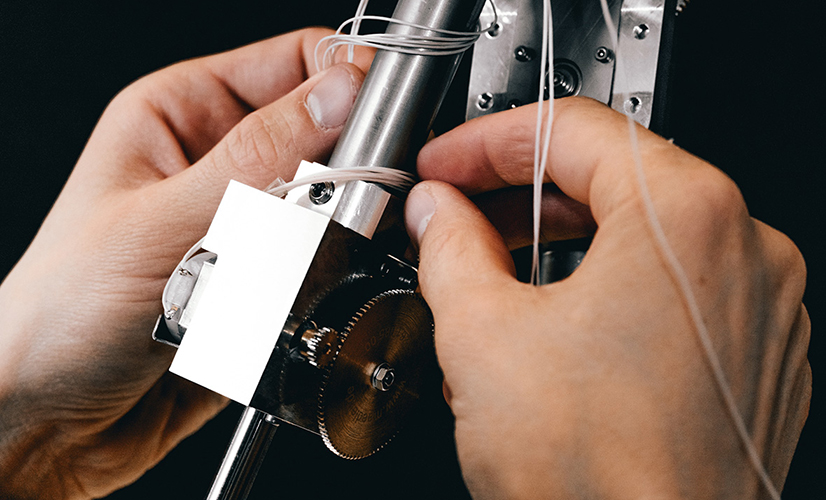 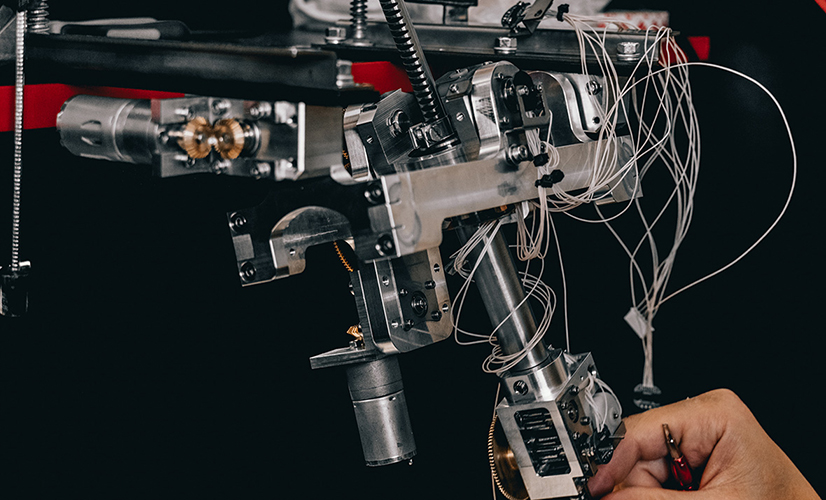 The most advanced Virtual Reality trainer available for surgeons in the healthcare industry. The first alpha prototype (TRL-5) is a fully developed laparoscopic simulations platform. The secret sauce is a core technology that can be applied to training across industries, from astronauts to neurosurgeons.

were purchased for decreasing equipment price in further manufacturing