The blood container is designed for automated whole blood centrifugation in a specialized centrifuge. 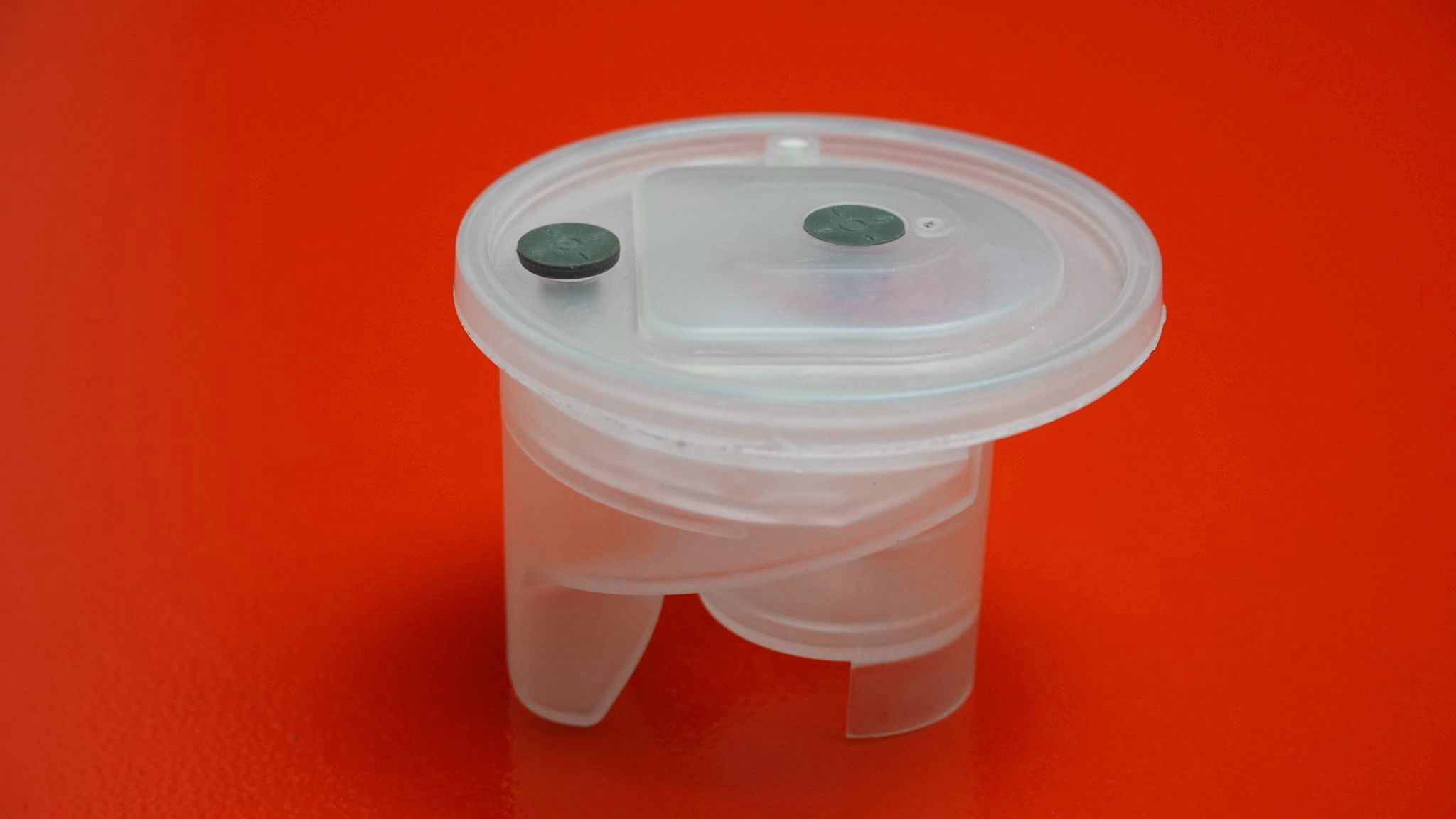 The container comprises two plastic beakers—a large and a small one—that are joined together and are tilted after the initial centrifugation to allow the contents of the large beaker to flow into the smaller one.

The large beaker is equipped with a separator in the form of a washer that is tightly fitted to the diameter of the beaker. During centrifugation, the separator enables the separation of erythrocytes from blood plasma.

The project was carried out in 3 stages. At the initial stage, our  engineers developed an industrial design of the device. The choice of the materials was limited though, as the device should adhere to the corresponding medical standards and be transparent in order to monitor the process and gauge the level of blood filling. For these purposes, polypropylene was selected.

The ports for the inlet and outlet of the blood and the medications received were selected from standard medical plugs that are intended to be punctured with regular medical needles to let liquids pass through. This reduced tooling costs because there was no need to create 2 more molds.

The container is equipped with a hydrophobic  filter composed of porous polyethylene. The filter prevents aerosols and solids from passing from the environment into the container. At the same time, it allows air to pass freely in order to equalize the pressures inside the container with the environment.

The device includes a separator. The density of the material of this part should allow to separate the contents into 2 substances.To achieve this, the separator must float at the intersection of these substances.  Yet, the material of the part must receive medical approval. As a result, the part was made of polystyrene, with a density of 1.05 g/cm3, which  falls within the range between (1.007-1.09 g/cm3). Because of this, the separator was able to position itself at the boundary between the layer of erythrocytes and the layer of platelet-rich plasma during centrifugation.

Our team designed and manufactured the separator and the container itself, based on the tolerances of injection molding technology. The minimum tolerance creates a lateral gap between the separator and the container that is wide enough to carry air through yet impermeable to blood components. In a nutshell, the space is bigger than an air molecule but smaller than a blood cell.

The container has a filtration module with a leukocyte filter that is intended to keep the blood leukocyte fraction. The leukocyte filter’s material  is squeezed between 2 frames that make up the filtration module (see fig. 1). To avoid material displacement during assembly, one of the frames was equipped with sharp positioning spikes (see fig. 1), which easily puncture into the tissue. The reciprocal frame has guide blind holes that are filled with glue before assembly.

By pressing the protrusion of the top frame against the depression of the lower frame, which are situated along the contour, the leukocyte filter’s material is forced firmly over the full surface of the frames and secured. Such a connection prevents the tissue from displacement and tearing when the needle punctures it during the insertion and withdrawal of the drug from the container.

In order to be snugly pressed into the container, the filter module assembly features contoured outside surfaces with a slope equivalent to the slope of the walls of the container cavity. The solution prevents the development of a lateral space between the walls and the medication from overflowing past the filter.The device is equipped with a ring lock so that the filter module is firmly positioned.

At the second stage of the project, we worked with the Customer to conduct research and development on creating and testing the prototypes of the device in order to produce a working medical-grade prototype.

The prototypes of the container, filter modules and the cover were manufactured using the injection molding machine. Since the geometry of these components was intricate, silicone molding was not an option. To cut down on tooling expenses, the initial prototype of the separator was cast in silicone. Following testing, it was discovered that this method failed to meet the necessary precision standards (tolerances) for its fit in the container. As a result, centrifugation of the blood could not be done effectively, due to unreproducible gaps between the separator and the container. It was decided to use injection molding to create the separator.

We designed and manufactured 4 molds for the filter, container, separator, and cover. We used D16T aluminum alloy for the molds to complete the project on time and within the Customer’s budget. If using aluminum molds rather than steel ones, the machining speed is increased, manufacturing costs and delivery time are reduced. Since aluminum molds carry heat more effectively than steel ones do, they heat and cool at significantly faster rates than steel ones – often up to seven times faster. In particular, a reduction in cooling time, which makes up the majority of the injection molding cycle time, has sped up the manufacture of parts. Also, the failure of the silicone casting of the prototype and our lack of knowledge on the viability of the intended model were additional arguments in favor of selecting aluminum.Because steel is highly strong and challenging to work with, making changes and refinements to the steel mold is nearly impossible once it has been created. Contrarily, aluminum is simpler to produce and allows us the possibility of reworking the mold in the event that casting issues arise.

As a result of the work, EnCata developed the device and modified the design for injection molding. The device testing produced successful results. EnCata provided the Customer with all the materials required for certification and manufacturing, including:

From idea and to mass production