IQ Pod is a liquor and wine dosing device that accurately measures alcohol pour-though in real-time. The IoT hardware functionality integrates with POS automation systems and provides customer self-service functions in the institution. 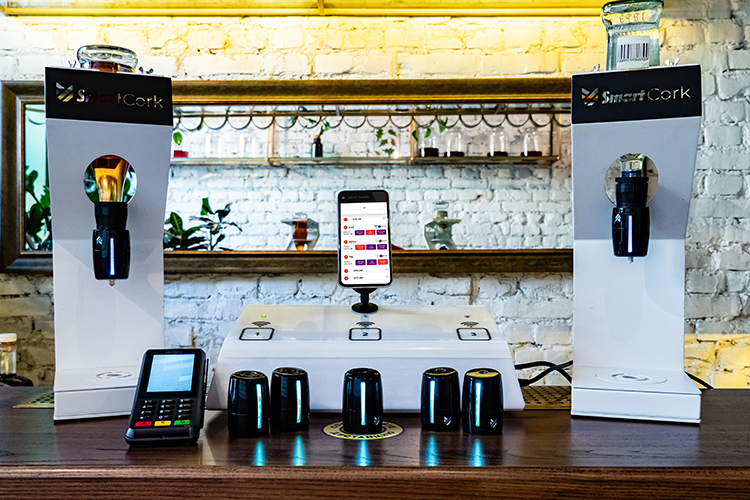 Lack of control of alcohol and liquor metering is the major problem plaguing the bars and hospitality industry. On top, alcohol misconsumption by customers is an acute issue spanning beyond public places.

These challenges are known to all the hospitality industry players: bar owners, distributors, and the spirits industry.

There are some solutions on the market, addressing various aspects of such problems. These are:

I.e. existing solutions do not provide an instant payment option to customers or lack an inventory management system. And by design, existing pouring systems are in physical contact with spirit/liquor which causes hygiene and taste problems.

Thus, the challenge of this project was to develop a COMPLETE industry solution, concerned with the new pouring & liquor metering technology and integrating with the ERP/inventory tracking system, as well as enable the modern means of payments (both the business POS, cards, NFC-enabled payments such as Samsung Pay, Apple Pay, and others).

Initially, a startup company came to EnCata with a very crude POP (proof-of-principle) prototype of the smart spout device built on Arduino, seeking design and engineering help in developing their product. The initial product idea was to provide private customers with a device that can tell them the amount of alcohol consumed and a tool for social interactions.

EnCata started this project from the technical feasibility study, choosing the technology for spirits and liquor metering. It soon turned out that new technology had to be developed from scratch. Thus far, a new concept was developed and EnCata’s engineers started to develop the alcohol metering module, which had to precisely measure wines, spirits, and viscous liquors containing sugars.

Upon completion of the R&D, a new industrial design was developed around the internal modules of the smart spout. The PCB received IoT functionality by adding BLE (Bluetooth low energy) and NFC:

After spinning out the PCB, embedded software was developed and deployed to the hardware. And the firmware team started work together with the cloud developers to bring up the API. From this point, the hardware and software engineers started to work in parallel:

1. The software team started developing mobile and web cloud applications, that provide the user all the statistics of the alcohol.

2. The hardware team continued to refine firmware and the mechanical engineers commenced the DFM, as part of the engineering validation testing (EVT).

It is estimated that bars (and, in turn, distributors) are losing up to 50% of their profits due to: mispouring by the bar staff, conveying unrecorded sales, low thoroughoutput during the peak time, running out of stock.

Upon the EVT completion, the device quickly passed the DVT, while the client’s team worked on Kickstarted production. The “Smart Pour” device featured at the Kickstarted as a B2C consumer product and sought a very modest reception.

In response, EnCata suggested pivoting the product and pursue the B2B market. A new business model was suggested, which required a new type of device to be constructed. The new [group of] devices relied on previously developed alcohol flow metering technology, building a whole ecosystem around the smart spout, converting it into the point-of-sale (POS) accepting cashless transactions.

The new use-cases aimed to incorporate the precision spirit metering technology, NFC-enabled payments + self-service, and enable supply chain control (from the very bottling station at a distillery) for every bottle.

For that, some of the whole industrial design of the device had to be revamped. New features incorporated in the spout design (snaps, screws, and bottle fittings) required high precision and superior surface finishes, in order to suit the engineering and design tests. Thus, all the mechanical parts were developed for injection molding, as early as for the EVT. Several molds were developed (in-house) and a few hundred parts were manufactured using our semi-automatic injection-molding machine.

On the software side, several APIs for payment systems (such as STRIPE), ERP, and POS (client application) talking to the server application. In this architecture, each device (client) talks to the web-server (located on a special cloud machine) via mobile or web-application.

1. A cross-platform application containing business-logic built with Ionic Type Angular technology (supports both mobile devices and browsers realized with common HTML, CSS, and TypeScript). The Ionic Type Angular is built on top of the RxJS library.

The remote control framework is configured with JMX. And JMS compliant API to ‘listen’ and processing of client messages. The software additionally uses MQTT broker to convey messages between the client and server application. 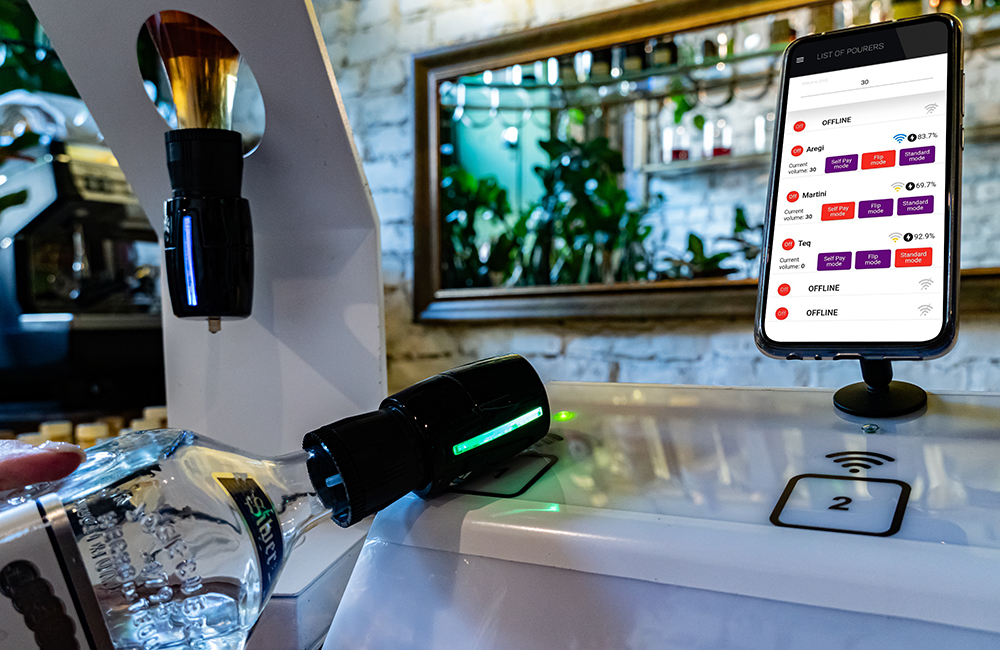 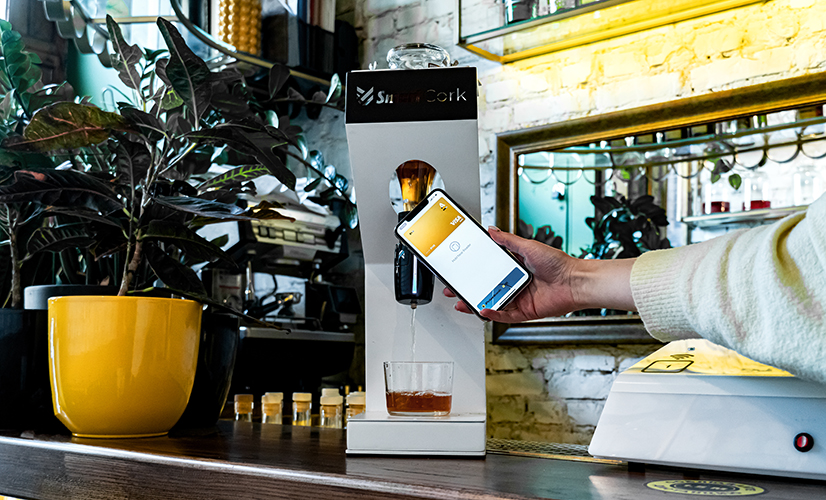 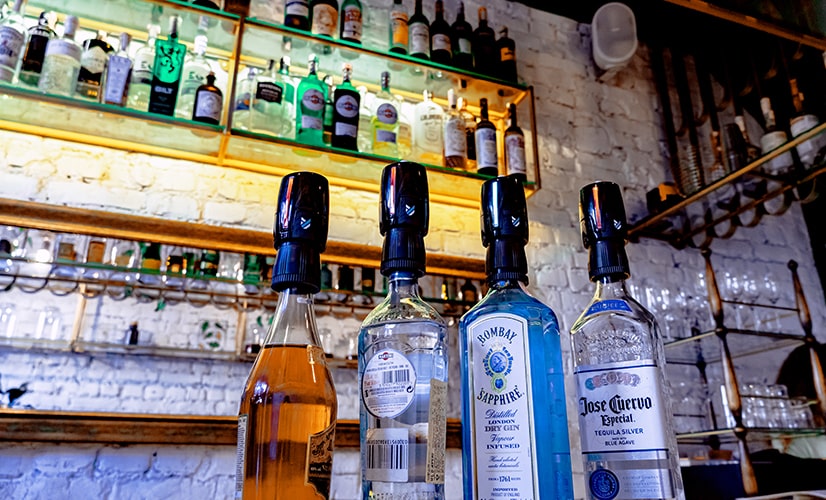 In this project, EnCata acted as an end-to-end development partner and took an active part in helping the startup pivot.

As a result, a new B2B product disrupting the spirits industry was developed. The Smart Spout device brings a new level of security and anti-counterfeit measures while adding value to other stakeholders: bar owners, bartenders, and consumers.

more revenue a bar generates with the device

within 1 year for each bar owner