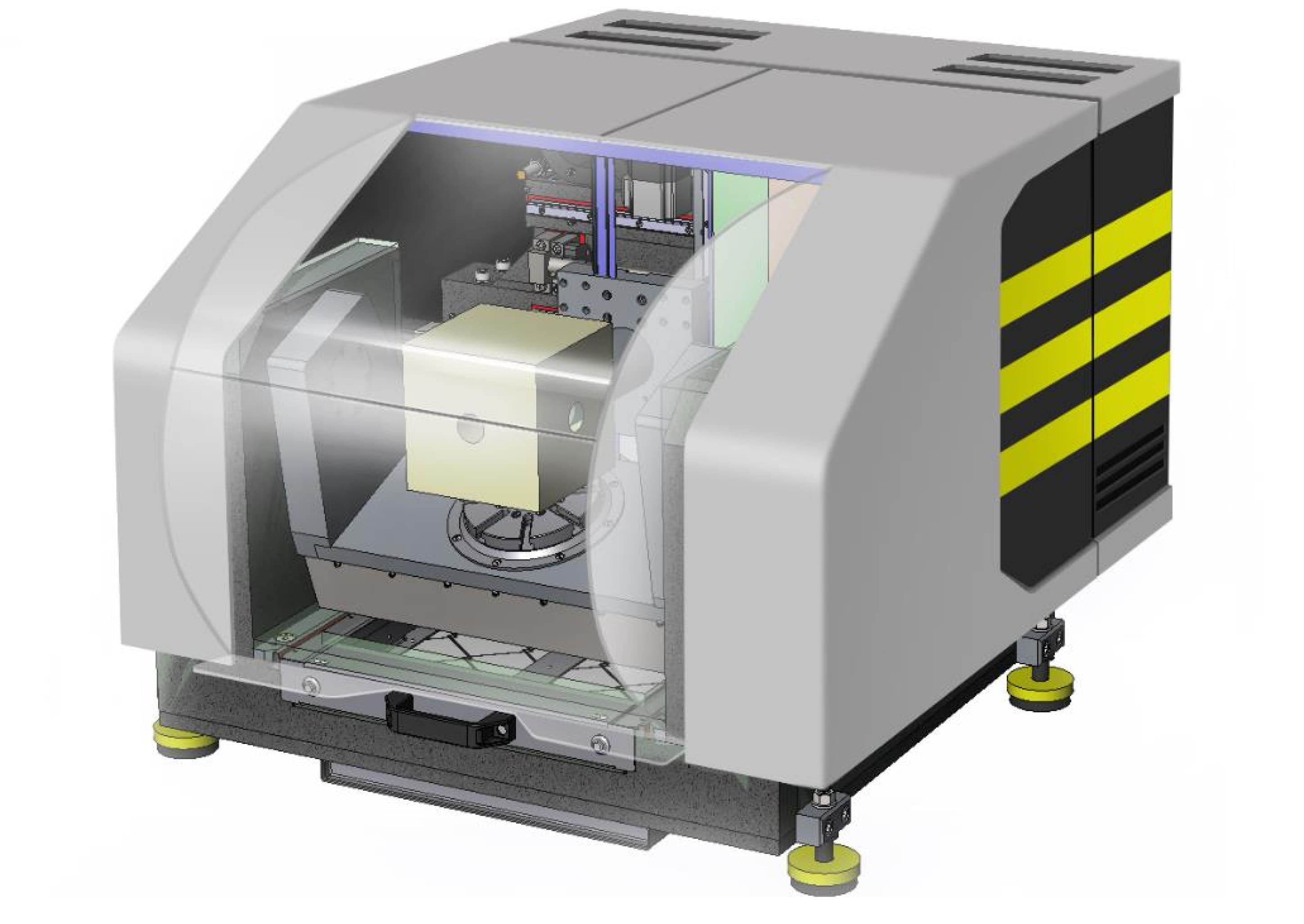 Selection of accessory parts for processing a wide range of materials: for modeling plastics, 8000–15000 rev/min is advised, and for aluminum, 15000–18000 rev/min. This range should be matched, while retaining high precision quality processing of up to 10 microns.

The machine should be small-sized for convenience of use while yet being robust and heavy to assure accuracy (reducing vibration and deflection).

During the first stage of the project, contemporary modern industrial design needed to be made for a small-sized prototype of a 5-axis CNC machine. It was originally intended to be used in the medical field for machining parts with complex configurations, such as various medical implants and prostheses. As the project moved along the stages, the customer decided to extend the spheres of the machine's application. The machine now can also be applied in jewelry workshops, home craftsmen, construction bureaus, etc.

Initially, we did benchmarking to analyze the competitors. The main goal was to identify the accessory parts with a zero or measurable in seconds rotation backlash, rigid bed, and a gantry to eliminate deflection. As a result of this stage, we provided the customer with a selection of possible machine parts, and decided on the best precision option taking into account the budget expectations.

The machine was subject to high requirements for processing accuracy (less than 10 microns). In order to achieve a high level of precision, it was necessary to provide a low vibration rate. Industrial solutions make rigid, heavy beds and gantries for eliminating deflection, as well as pricey accessory parts with zero backlash, to achieve this goal. Such an approach contradicted requirements for cost, ergonomics, and compactness.

For the machine, we designed a modular design. Modules, such as cooling lubricant supply system, vacuuming systems, instrument replacing systems, measuring probe, laser engraving head, modules for fixing workpieces, were supplied separately. This allowed for the cheaper cost of the basic version of the machine. The user now can buy additional modules without overpaying for unnecessary features.

Initial hypothesis was the usage of ceramic granite as a bed material. It has a huge weight and allows to decrease the production costs for the bed once compared with cast iron or steel. We did rounds of testing which showed that ceramic granite was too fragile to reach such an objective. We designed a bed from ceramic granite, reinforced with rolled aluminum. That way, we obtained a vibration resistant bed with rigidness which would allow the machine to function. The weight of the machine once assembled was roughly 80 kg. Simulations revealed that this weight is sufficient to stop vibrations that can impair the processing's precision.

The use of a composite material made of aluminum and ceramic granite made it possible to gain the desired weight and at the same time eliminate the disadvantage of ceramic granite, which is its fragility. We were able to confirm this with the help of computer simulations at the development stage, that way avoiding the costs of prototyping the initially made hypothesis.

The second stage was the development of a cooling lubricant supply system for the working instrument of the machine and workpieces. High-pressure coolant distributes heat away from the tool and workpiece. Cooled down areas of the processing zone reduce tool wear and provide the possibility of increasing cutting speed. Control of the chip formation excludes the possibility of unplanned equipment shutdowns and raises its utilization rate. Cooling lubricant is supplied at a high pressure through the nozzles that direct parallel laminar flows at high speed to a section of the application zone.

The coolant is provided through a pump of a hose into the tank, which is divided into two sections – clean and contaminated. Then the coolant  enters the hydrocycle, where large contaminants are captured and the purified liquid enters the second stage of purification. Then the pure liquid flows into the clean section of the tank, from where it is supplied to the machine by the second pump. That way, the filtered liquid is collected in a tank where it is cooled. This module allows MiniCNC to stand out among the competition, not to mention DIY kits.

The third stage of the project was the carrying out of the strength calculations of machine parts. Calculations of the carrier system of the machine are aimed at improving the accuracy and performance of the device. We conducted tests using numerical simulation methods in order to determine the elastic deformations of the machine parts. The calculations included both the deformation of the base parts and the displacements that occured in the joints of the parts. The results of the calculations made it possible to evaluate the design decisions made at the development stage of the machine positioning system, as well as allowed to collect necessary data for its optimization. Simulation results showed that the turn table and bed needed to be increased in linear rigidness. During the step by step optimization of the design of the turntable and bed, several options that could significantly improve the rigidity of the unit were found. The best solution for the bed turned out to be the implementation of the additional supporting parts, and for the turntable – the addition of the longitudinal stringers. These improvements increased the system’s rigidity by 80 percent 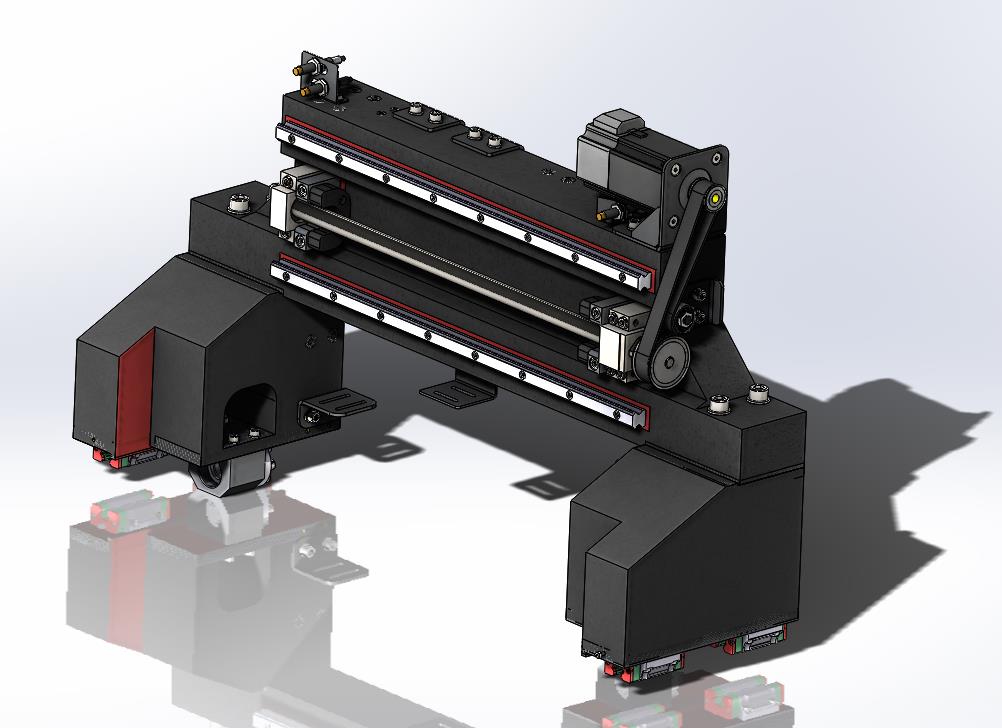 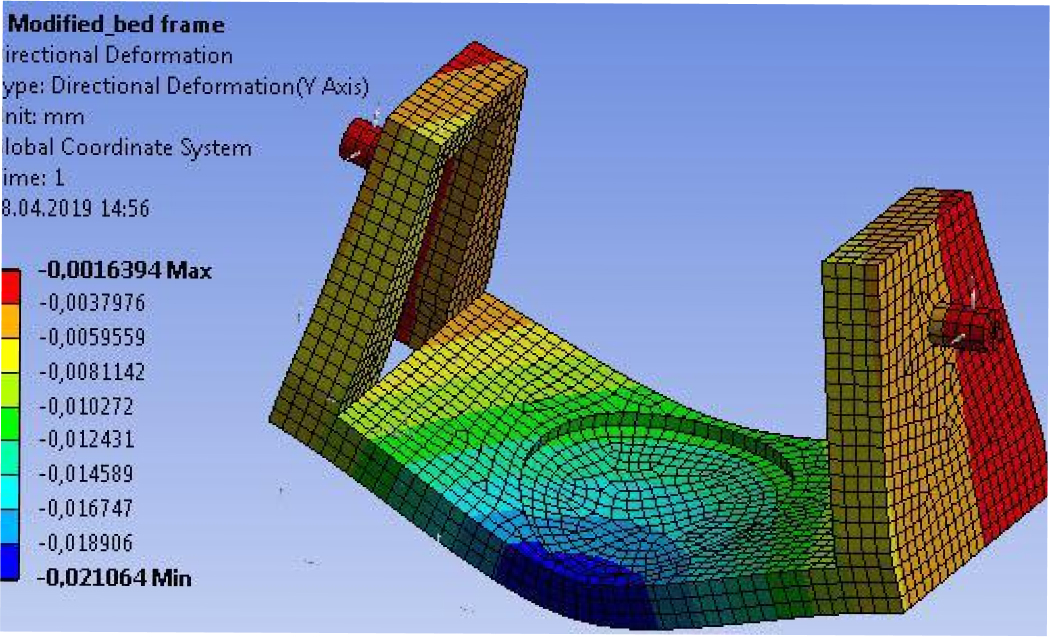 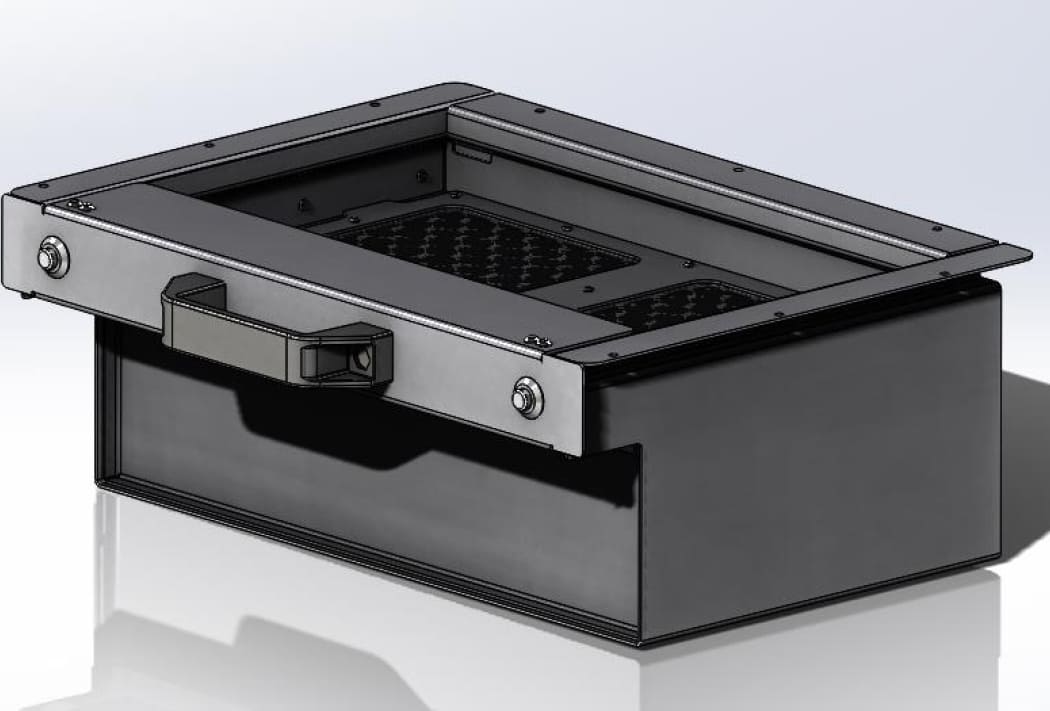 As a result, we developed an industrial design for a 5-axis CNC machine, carried out a number of experiments with the cast ceramic granite and machine calculations to measure the required technical parameters. The customer received the benchmarking results, 3D model prototypes of the machine, as well as the results of rigidity calculations.

Weight of the finished machine

The work space size in centimetres